In 2015 the then Secretary Graham Brown received an unsolicited email from a chap in the US wanting to use some of the photos from our website. Graham passed the email to me and I corresponded with the chap over a few images and thought nothing further. We get a few emails like this – the last USA one was asking about the specification for a doll (I sent a couple in the post). 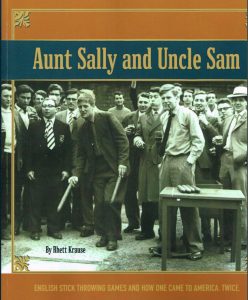 Cover of the Rhett Krause book on Aunt Sally

Last weekend two copies arrived of some 200 pages full of historical detail of Aunt Sally and other derivations of throwing games preceding ‘the modern game’ including US contingents. As Rhett put it in his introduction “It struck me that a simple work of perhaps two pages would explain all [of Aunt Sally] to the audience. My initial goal was as simple as that.”

Those interested to view a copy can contact me. Rhett had also donated some to other leagues that contributed and also donated 6 copies to Charlbury Beer Festival for charity auction.

Aunt Sally history has always been something of a mystery and this chap has done his best to uncover some of it and we thank him for it.

You can order a copy online but shipping costs can be prohibitive i.e. the book costs $30 and shipping is $55-100+. See Levellers Press.