You are here: Home › New? Start Here › How to Play
Tweet

In Aunt Sally, the single white stubby skittle, about 6 inches high and 2 and 3/4 inches in diameter, is called a “dolly” or “doll” and the round-ended projectiles, of which there are six, are 18 inches long, 2 inches in diameter and are called “sticks”.

The doll is positioned on top of a “swivel” which is inserted into a hollow rod (the “iron”) driven into the earth so that the top is two and a half feet above the ground – the top of the doll is therefore two stick lengths high. 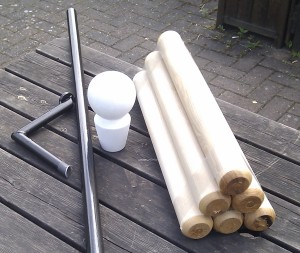 The players throw the sticks, underarm or roundarm, at the doll from behind a line known as the “hockey” (or “oche”) which is 10 yards (30ft) from the iron.

Each turn consists of six throws and a ‘doll’ is only counted as long as the stick hits the doll before the iron.

Normal league play has two teams each consisting of eight players and three legs or “horses” are played. Each horse consists of each member of each team having one turn so that each team makes 48 throws.

– with thanks and adapted from the Oxford Aunt Sally League

To spice things up on a league game, some sides put money on it:

Examples of Good and Bad Dolls: