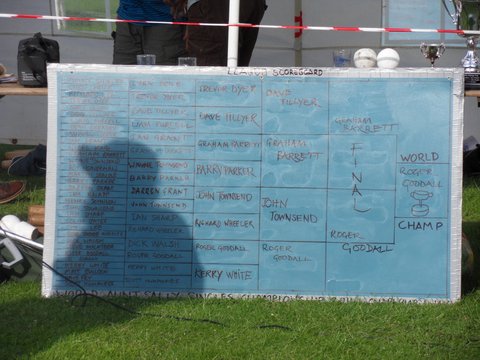 Well no luck for the Abingdon League in the World Championships this year.

Our own players got knocked out before the quarter finals with Roger Goodall taking the trophy and the prizemoney.

For more pictures click here with thanks to Kerry White.

Next year we need to do better Abingdon !

A newcomer to the game (only been playing since 2005!) I played for the Fox Steventon (until 2016) and through the cajoling of Martin Sheridan and Graham Barguss setup the first proper website for us which has now developed into this version including electronic scoring! I also previously took the snaps on finals night and created the Aunt Sally TV section on YouTube. Oh and I got us on the telly with Mud Men on the History channel and promoted Aunt Sally at my wedding!
View all posts by Paul Stone →
The 14 and overs…..
Summer 2015 Week 9 Scores – Half Way!