You are here: Home › Paul Stone

A newcomer to the game (only been playing since 2005!) I played for the Fox Steventon (until 2016) and through the cajoling of Martin Sheridan and Graham Barguss setup the first proper website for us which has now developed into this version including electronic scoring! I also previously took the snaps on finals night and created the Aunt Sally TV section on YouTube. Oh and I got us on the telly with Mud Men on the History channel and promoted Aunt Sally at my wedding!

This Abingdon and District Aunt Sally Association was founded in 1960 by Basil Collins and collegaues. Basil sadly is no longer with us but when he retired from the league in 1990 he wrote a document cataloging the League in the first 30 years. A reproduced copy is available in the History section on the website. 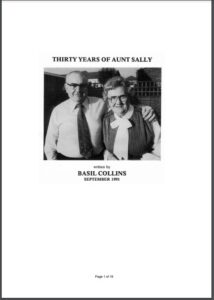 At the AGM this week Roger Nichols suggested that we should collate the ‘next 30 years’ so we are looking for any historical artifacts you may have to get us started. If you want to volunteer to help please do!

We already have a few photographs in the Photos section but we are lacking a complete set of Finals Night programmes since 1991 and any other stories or newspaper articles that we can summarise and form ‘The Second 30 Years’ booklet.

Check out the The History Books in the Photos section as well.

Contact any member of the Committee if you’ve got any:-

Alternatively login and leave a comment and we’ll be in touch.

After a lovely DRY Sunday afternoon at Abingdon Utd FC starting at 1.30pm we managed to succeed in playing all the competition fixtures except the singles. We finished at 7.30pm and by that time most players were flagging. If it wasn’t for Committee member Roy Taylor’s wife Pauline, who very kindly donated refreshments in the form of sandwiches etc which we had around 5pm, I don’t think we would have lasted that long! However the bar was open the sun was shining and everyone was in good spirits for some great Aunt Sally.

As expected there were some were hard fought matches going 3-1-6 sticks when drawn after 3 legs, some not so much! Having two pitches meant that Abingdon Utd weren’t always at a home pitch advantage and thanks to Claire Foster and Roy Taylor for sorting the draws on the day we tried to keep both pitches busy. I tried to be the MC for the occasion and was glad Reg Couch brought the speaker and microphone!  I’d also like to thank both the ladies behind the bar, Brian Clapton (for dolls and pitch prep) and for those who volunteered (or otherwise) to ensure that matches were stuck up/called and scored.

There were several learning points the committee are reviewing so it can be improved if repeated next year. It’s been estimated that to run the remaining singles would have probably taken another 1.5 hours so these games will be rescheduled at independent venues to be decided by the committee meeting this week.

As this was the first ‘one day event’ for the competitions I think it went very well (and I’m not on the committee!) so if you were there and want to login and leave a comment on this post or email team support with some feedback it’ll all be welcome I’m sure.

As for the results below they speak for themselves with the two top Premier sides managing to fight it to the final for 5’s,4’s, 3’s, Pairs and Secretary’s! Well done for Bernisfield and Croft Nomads for hanging in on the Captains and Pairs.

Finals Night is Wednesday 21st September and Presentation Night is Friday 4th November.
NOTE: once a player has played they cannot be substituted so they must be available for the final game night.

SINGLES NOTE: only those players who registered and turned up on the Sunday will be in the Singles
as the fixture has already been drawn and venues/players will be announced in due course.

If you want to play and haven’t already registered then you need to be
at the venue before 12.30 when the draws will take place by the Committee.
NOTE: once a player has played they cannot be substituted so they must be available for the final game night.
League registered players only.

We will be using both pitches at Ab.Utd.

BAR will be OPEN!

Finals Night is Wednesday 21st September and Presentation Night is Friday 4th November.
NOTE: once a player has played they cannot be substituted so they must be available for the final game night.

To make this run smoothly the losing team will provide 2 players to call/stick up for the next match or for 1 player matches the last 2 players.

Matches will be best of 3 legs and 3 stick decider if drawn until won.

Round up of the best after week 7

So far this season we’ve had nearly 90 blobber scores (X-X-X or no score at all) recorded across all results to date – far too many to mention by name – take heart that you can only get better from there and of course we’ve all had a LONG break as an excuse to roll out!

Get practicing and Good dolls!

You’ll notice the website menus have been reordered. This is so that if you are on a mobile phone or other small screen device the Navigation menu gives you match card entry and player relevant items at the top of the list. For regular ‘PC’ users this means the menu now fits on a widescreen monitor (if you don’t have one of these it really is time for a new PC).

Any suggestions for improvements please leave a comment below.

It’s been a few years since we originally setup the website with ‘users’ matching ‘team names’ and every year we get queries about passwords etc. So read on and find out what you can do to help make this easier and some of the reasons we have to do what we do!

If you are having difficulties in logging in please use the Team Support email and contact us separately.

PASSWORD RESETS : If you have a valid email address set on your profile you can request a password reset yourself. If not when you get us to reset it and you login successfully please add one to your profile (see below).

USER ACCOUNTS: We get many bots trying to register fake accounts so it’s difficult to see the wheat from the chaff when valid players or AASL friends do not make it obvious they are genuine users.  We can get dozens of these a week so it’s not a simple job to spot fakes or even genuine users. They try it on with fake accounts so they can attempt to hack the site later.

We are therefore removing any accounts with risky/undeliverable email addresses. These will be denied and deleted. If that is you and you can’t login either email Team Support or re-register with a VALID email address AND make it obvious you’re not a bot by using your proper name or name+team name. That way, if you are traceable in the league, we can approve registration quicker.
If you are not a registered player then please email Team Support for help and thanks for being interested.

MATCH CARD PERMISSION: If you are a Secretary (or stand-in) and need to enter Match Cards then use the Team Support email after you have registered successfully and this will be separately enabled for you if you give us your team name, email/user details.

EDIT YOUR PROFILE – It is also in your interest to set your First and Surname in your profile – again this helps us validate real users. Once logged in just click on the top right where it says ‘Hi,….’ and edit your preferences etc.

EMAIL and PASSWORDS: It’s in your interest to have a valid email registered because you can reset your own password when forgotten and get notified of updates. On passwords we are insisting on high strength passwords which can be generated for you on reset and if you use a modern browser you can safely store these for next time you login so you don’t have to remember them. Why ? Because of the simplicity now in hacking passwords means crackable passwords could be the weak link that gets the website hacked. By the way – you need to have the strongest and different passwords for all your accounts especially your email account and any banks!

2
By Paul Stone on 9th May 2022 in Newsletter, Summer League Reports
Tweet

WE START THIS WEEK on 11th May.

8s Competitions will be played on THURSDAYS in June/July (TBC)

You may have a login on this site so that

Please try your login NOW – especially those of you who enter match cards – you don’t want to get stuck when you win your first game on Wednesday!

If you don’t have a valid email address on your login you won’t get newsletters nor will you be able to reset your own password should you have lost it! So check your own account as soon as so we can make any necessary updates soonest. Login and check the profile in the top right hand corner where it says Hi!

You CAN register a new account but the email address has to be unique (and not used before) and as we have to vet these (you wouldn’t believe how many email addresses from abroad we get asking to register so they can try to hack our site) please make it obvious you are a genuine person or venue – or just drop a second email to Team Support so we can join you and the team up.

END_OF_DOCUMENT_TOKEN_TO_BE_REPLACED

For Top Dolls etc see online score reports and don’t forget to change the Year to 2018 and Season to Winter before clicking Submit!

And the Dirty Dozens…..