You are here: Home › Same game, different take
By James Barguss on 8th August 2017 in A Chairmans musings, Newsletter
Tweet

I’ve recently written a couple of pieces for the website. Mainly to generate some new content for the site but also because I was recently given some feedback over pieces I wrote a couple of years ago which made me think that it wasn’t just a couple of people reading them. Also one of the hardest parts of writing isn’t the writing but having things to write about.

Back in October 2015 I moved from Abingdon to Banbury. I’m not sure if you are aware but Aunt Sally is alive and thriving in Banbury, Bicester, Bampton, Wychwood, Chipping Norton as well as Oxford and Abingdon. 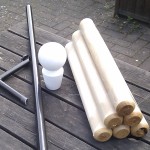 A new set of kit

I’ve played Aunt Sally for over 25 years but never played outside of Abingdon except for a few inter-league games and the odd competition. So I decided it would be a good idea to sign for a local team and see what it was like playing for another pub. I chose The Easington on the Bloxham Road, Banbury because it’s walking distance!

After what seems like my worst season start (in 25 years!!!!) for both leagues I seem to have found my feet. Both leagues have an enormous amount in common apart from the game itself. Aunt Sally attracts characters, I’m not sure why that is but I can confirm it is the same in Abingdon as it is in Banbury. I suppose really it’s because you have 16+ men and women gathering on a weeknight invariably in the pouring rain to play what is honestly a pretty niche game with very little spectator appeal.

So what are the differences then? I should note that all of my following observations are anecdotal in nature. I haven’t spent any time researching the data nor am I about to. Take everything I say with a pinch of salt. So, in Banbury of the pubs and clubs I’ve played at only one had a hocking. Let’s take a minute to think about that. In Banbury they do not have a physical barrier to put your foot against or step up too. They do have a slab or a line clearly marking where you should stand but there is no physical barrier. I find that interesting. It means that in Banbury the cry of, Foot Fault presumably falls on deaf ears since you have no way of telling if they have or not. I don’t know if foot faults are specifically mentioned in the Banbury Aunt Sally rules but its interesting none the less.

One of the biggest differences between the two leagues is the calling sticking up relationship. In Abingdon the Home side call and stick up for both the home and away teams for the entire game. In Banbury it’s slightly different. Basically a member of the opposing team will call for the other team for one leg but the sticking up is done by a member of your own team. This means the calling is always done by the other team and you only call for one leg so reducing the time spent calling allowing you much longer for a beer and chat. Sticking up works by Anchorman sticking up for the first man on then once the first man has thrown the he follows the sticks down and takes the place of the Anchorman and so on. I really like the way this plays out mainly because it means you’re not in the shed for ages in the evening. This means more time for a beer which everyone can get behind!!

Another difference is the pitch length ! In Abingdon we measure from hocking to iron as the 30ft – in some others it’s 30ft to the base of the doll – an extra six inches that could make all the difference!  I didn’t realise this until about halfway through my first season. I believe this is a Banbury only peculiarity, though I would welcome anyone letting me know if I’m wrong.