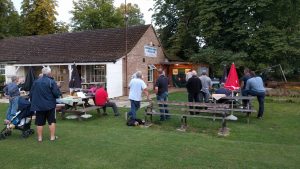 A cool but dry evening at Steventon Sports Club

A damp early evening cleared for the Captain’s and Secretary’s knock out competition at Steventon Sports Club.

With only 6 Secretaries and 8 Captains 2 prelim games were battled for the Secretaries.

Nicky Biggs battled through 3 legs and finally won his game against Paul Ealey in a 3 stick decider.

Geoff Lee took his game against Bob Duff to 3 legs to get his place in the next round cracking two 4s in the process. In the following round Nicky Biggs couldn’t get his form back as Geoff Lee won the first leg 4-3 and took a 1 stick decider to secure his place in the Final.

Graham Brown made it look easy as he set 5 in the first leg against Keith Buckle who couldn’t get past a 1 in the second leg to save the game. 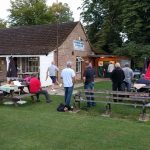 In the Captain’s an after draw mistake by the official gave Dave Sapey a bye to the next round.

Terry Downes took Dave Dix to a 3rd leg with minimal scoring but only scored 1 in the 3rd leg decider which Dave doubled.

Mick Philips got all 4s to win through even with Paul Longford setting a great 5 in the second leg.

Stuart Wilson won over Michael Jarvis when the 4-4 second leg went to 3 sticks (2-2) and 1 stick. 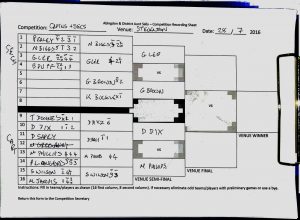 2016 Scorecard for Captain’s and Secretary’s Knockout

In the Semi-Finals Dave Dix made short work of Dave Sapey’s 1 in the first leg and then setting a 6 – a hard act to follow even for the best – and secured his place in the Captain’s Final.

Stuart Wilson set respectable 3s in the other Semi-Final but Mick Philips got the 4s he needed for his place in the final.

A newcomer to the game (only been playing since 2005!) I played for the Fox Steventon (until 2016) and through the cajoling of Martin Sheridan and Graham Barguss setup the first proper website for us which has now developed into this version including electronic scoring! I also previously took the snaps on finals night and created the Aunt Sally TV section on YouTube. Oh and I got us on the telly with Mud Men on the History channel and promoted Aunt Sally at my wedding!
View all posts by Paul Stone →
Summer 2016 – Week 12 Results
Competitions: Pairs Knock Out Reschedule – This Thursday