With the Wednesday’s thunderstorms the Pairs Knockout competitions were already one venue down with the Tandem limping out without any lighting due to the storms that took out some of Kennington. The Tandem venue  was replayed in August (after other competitions). 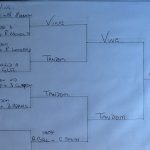 Geoff Lee ran the rescheduled Pairs at the Tandem on 4th August.

M Manion & J Pounceby from the Vine in Cumnor (section B) won through to the finals night, they both played outstandingly with Manion not scoring less than 3 dolls every visit.
They played D Butler & B Adams in the final game who gave them a good run for their money but came up against 2 worthy opponents who thoroughly deserved the victory.

Semi-finals will be played on Finals Night on Wednesday 14th Sept at Abingdon United FC.

Winners of the venues are as follows and pictures etc below.

A soggy night at Berinsfield didn’t deter Ian Brook from scoring 4’s in the rain. 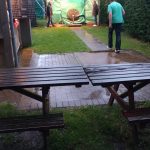 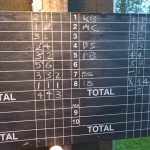 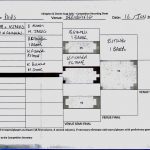 A newcomer to the game (only been playing since 2005!) I played for the Fox Steventon (until 2016) and through the cajoling of Martin Sheridan and Graham Barguss setup the first proper website for us which has now developed into this version including electronic scoring! I also previously took the snaps on finals night and created the Aunt Sally TV section on YouTube. Oh and I got us on the telly with Mud Men on the History channel and promoted Aunt Sally at my wedding!
View all posts by Paul Stone →
Summer 2016 – @Week 14 – the Dirty Dozens and the Unlucky for Some!
WINTER LEAGUE: Player Vacancies