Thursday saw the next set of competitions play out at Abingdon Conservative Club and Abingdon United FC in the form of the 4s Knockout. 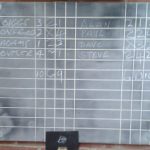 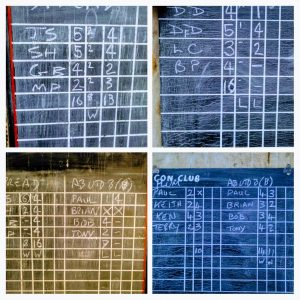 At ACC Spread Eagle B(B) failed to field (due to sickness/holidays) and left Spread Eagle to take on Ab.Utd B(A) in the first match.

With four players both teams managed 16 in the first leg with Spread managing all 2’s in the 3 stick leg which Utd couldn’t match. Spread then set 13 which again Utd couldn’t chase putting Spread into the semi final.

Plum Pudding were knocked out 2-0 by Ab.Utd B(B) (scores illustrated).

Semi final between Spread and Ab Utd B(B) had Utd setting 7 which John Simmons getting an impressive 6 to leave Scott Humphries with a simple 2 for the first leg win. Spread set with a 4×4 giving 16 which was no match for an under pressure Utd despite Paul Barrett’s fine 4 start.

4s Final is between Spread Eagle and Ab.RBL to be played on Finals Night Wed 13th Sept at Ab.Utd.

A newcomer to the game (only been playing since 2005!) I played for the Fox Steventon (until 2016) and through the cajoling of Martin Sheridan and Graham Barguss setup the first proper website for us which has now developed into this version including electronic scoring! I also previously took the snaps on finals night and created the Aunt Sally TV section on YouTube. Oh and I got us on the telly with Mud Men on the History channel and promoted Aunt Sally at my wedding!
View all posts by Paul Stone →
Summer League : Week 10 Results & Comp News
Summer League: Week 11 Match Results