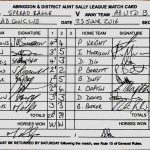 On what proved to be a dry but cloudy evening at Abingdon Conservative Club the Spread Eagle took on league leaders Abingdon United B in the final of the 8’s knockout competition.

With Ab.Utd winning the toss and setting a respectable 22. Spread replied and scraped the 22 for a 3 stick decider.  United won the toss and set 10 which Spread matched by the 7th player to take the first leg.

The toss once again went to United (much to the angst of birthday boy Captain Mick Philips) but this time Utd Captain Dave Dix put Spread Eagle in and they took the opportunity to rack up 29 dolls. United replied poorly with a 2-2 and then hope raised with 5-3-4 but then was lost again as it became impossible to match such a premier score.

Video is now available on Aunt Sally TV on YouTube !

A newcomer to the game (only been playing since 2005!) I played for the Fox Steventon (until 2016) and through the cajoling of Martin Sheridan and Graham Barguss setup the first proper website for us which has now developed into this version including electronic scoring! I also previously took the snaps on finals night and created the Aunt Sally TV section on YouTube. Oh and I got us on the telly with Mud Men on the History channel and promoted Aunt Sally at my wedding!
View all posts by Paul Stone →
Summer 2016 – Week 7 Results
Summer 2016 – Week 8 Results