A great summer evenings with teams turning out at both the Spread Eagle and Abingdon United FC for the Fours Knockout Competition. 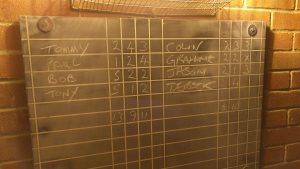 At United the prelim saw Ab Utd B(A)  take  Spread Eagle B in a straight 2 legs with Bob Duff scoring the only 6 of the night. They then went on to defeat Berinsfield.  Steventon Sports defeated Plum Pudding to meet United in the semi.
In the Semi Final Utd started a strong first leg with 13 including two 5s from the tailenders which Steventon couldn’t match but then Steventon went on to take the second leg as United slowed to single figures. Utd then set 11 which was giving Steventon a chance with ‘just’ a 3 per person to win. Unfortunately a good 3 start was downed with a blob putting severe pressure on the lower half of the team that left anchor Derek Fletcher with a big ask of a 5 to draw which failed with the first two sticks.

At the Spread Eagle venue Abg RBL A eased pass Berinsfield A in the first preliminary.

Spread Eagle A took on Abg Utd B (A) in the other prelim. At a leg apiece, the Spread set 16 only for Abg Utd to come out victors with 17 and a stick to spare, the best leg of the night..

In the semi finals the Tandem beat the Spread Eagle B (B) and Abg Utd B (A) beat the Abg RBL A.

In the final the Tandem set in both legs, but leg sets of 6 and then 10 weren’t enough to test Utd, with Barry Parker not having to throw a stick in anger on the anchor.

The final will be between both Abingdon Utd B teams!

Their line up (now fixed as they’ve played will be):-

Ab Utd B (A)  – D.Davies/L.Clapton/I.Morrison/B.Parker 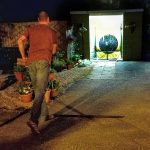 A newcomer to the game (only been playing since 2005!) I played for the Fox Steventon (until 2016) and through the cajoling of Martin Sheridan and Graham Barguss setup the first proper website for us which has now developed into this version including electronic scoring! I also previously took the snaps on finals night and created the Aunt Sally TV section on YouTube. Oh and I got us on the telly with Mud Men on the History channel and promoted Aunt Sally at my wedding!
View all posts by Paul Stone →
Summer 2016 – Week 10 Results
Summer 2016 – Week 11 Results