Venue winners and securing their place in the Semi-Finals :-

From our reporter at the Legion – “Just the 8 turned up and had a great night of Aunt Sally with Dave Sapey hitting two 6’s on the night but couldn’t quite manage the momentum up in the final game.” 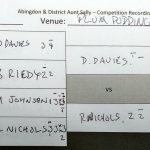 From the Plum Pudding – “with 8 players up and 4 from Berinsfield it was statistically inevitable that some ‘friendly fire’ was going to take place. Dave Davies saw off Paul Ealey and then Brian Reidy (who’d already beat his teammate Stuart Wilson in a 3 leg 3-1-6 stick clincher with two 5’s in the game).

Roger Nichols saw off Mick Greenway in a third leg 3 stick decider and then Malcolm “new specs” Johnson who’d already cracked a 5 to see off Ken Fisher lost out to Roger’s consistent 3’s. In the venue final Dave Davies only managed to set a 1 which Roger doubled and then Roger set a 2 which Dave just couldn’t manage. Take a look at the scorecard and it just shows competitions are anyone’s game on the night.”

Only 5 players turned up at the Spread – Dave Dix beat Brian Adams in the Venue Final.

A newcomer to the game (only been playing since 2005!) I played for the Fox Steventon (until 2016) and through the cajoling of Martin Sheridan and Graham Barguss setup the first proper website for us which has now developed into this version including electronic scoring! I also previously took the snaps on finals night and created the Aunt Sally TV section on YouTube. Oh and I got us on the telly with Mud Men on the History channel and promoted Aunt Sally at my wedding!
View all posts by Paul Stone →
Summer 2016 – Week 9 Results
Summer 2016 – Week 10 Results