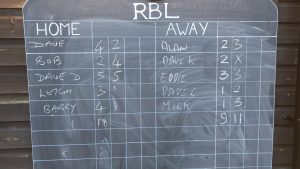 At the Legion Abingdon United B took down Abingdon Conservative Club in an immediate semi final in two straight  legs (too much Wimbledon) and this was the only match as both Berinsfield and Steventon Sports couldn’t field a 5 player team.

At the Plum Pudding all four teams turned out and it was already a tense first match between Tandem and Spread Eagle that had gone to 3 sticks in the first leg and was decided in the 3rd by the Tandem.

Next up Spread Eagle B took Berinsfield out to get themselves a place in the semi final.

The Venue Semi-final then fell between Tandem and Spread Eagle B.

This one went a leg a piece and down to the last few sticks of the Spread in the third and deciding leg but unfortunately anchorman Barry Stowell couldn’t get his last two sticks on target to keep them in the game with a win or draw.

Despite the showers there was a great atmosphere both in banter and in gameplay. 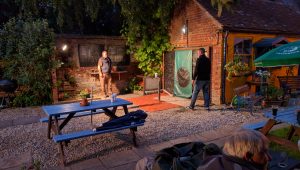 A newcomer to the game (only been playing since 2005!) I played for the Fox Steventon (until 2016) and through the cajoling of Martin Sheridan and Graham Barguss setup the first proper website for us which has now developed into this version including electronic scoring! I also previously took the snaps on finals night and created the Aunt Sally TV section on YouTube. Oh and I got us on the telly with Mud Men on the History channel and promoted Aunt Sally at my wedding!
View all posts by Paul Stone →
Summer 2016 – Week 8 Results
Summer 2016 – Week 9 Results