This post category is for match reports for Summer League matches. In the future, it will be updated automatically with match results after they are entered into the database by team captains.

Presentation Night for the Summer was last Friday and the photos are now available online. Many thanks to Ellen Downes for snapping on the night.

The previous Winter League Presentation Night (April) were loaded but a bug prevented their viewing. They have now been reloaded for you to view.

Go to PHOTOs on the menu and take some memory lane trips while you’re there – we have 10 years worth and more in the History section !

If you have any old photos, programmes or clippings that you want to share get in touch with the Committee.

Friday night saw the culmination of the 2018 Summer Season and as we move into the winter break I want to update you on the AGM date and give you some important news.

As usual the AGM will be on the last Monday of January which this year is the 28th starting at 8pm.

Those of you who were there last year know that long serving member Paul Stone will not be standing for re-election for the 2019 season.

I want to take this opportunity to inform you that I also will not be standing for Chairman either. I will continue to do some of the more mundane admin work but the Chairman should be more involved with the league than routine admin work. The league is in a good shape and sponsorship has been confirmed for the 2019 season by Dyno Plumbing and Heating.

I hope that if you can spare the time you will contact a member of the Committee before the AGM to pledge support.

Entry by programme on the door at £2.50 each

Singles and Pairs Semi-Finals and Finals

The Eights Final between Plum Pudding and Abingdon Utd B took place on Thursday 20th Sept.

The venue was moved on Finals night as Ab.Utd were due a training match and with high winds/rain forecast it would have been too exposed by the football pitch having to play on the non-home pitch for Utd. The venue was the Spread Eagle and although a few sticks went sideways in the wind the rain mostly held off and the game was played.

Presentation Night for all trophies/plaques for Section and Competition Winners will be on Friday 30th November at Ab.Utd FC. Programmes will be on sale soon at the winter league on Wednesday evenings at Ab.Utd. 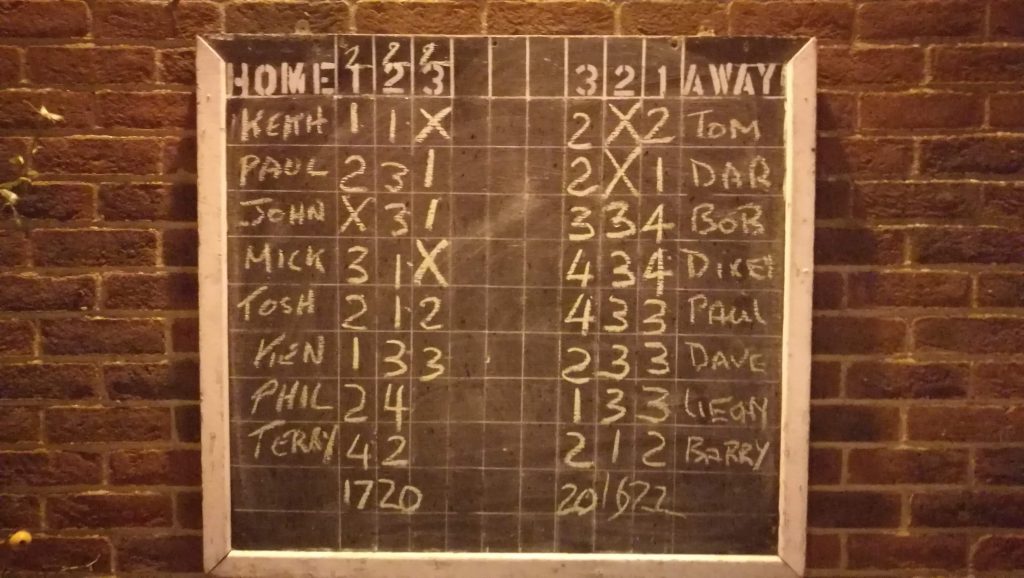 END_OF_DOCUMENT_TOKEN_TO_BE_REPLACED

They say it’s the taking part. It’s that (the league needs you!) but it’s also the getting better. The only way is up…..

END_OF_DOCUMENT_TOKEN_TO_BE_REPLACED

A bumper season of Sixers this year….three players with doubles and Brian ‘Laddie’ Moody missing the 18 by 1 doll.

END_OF_DOCUMENT_TOKEN_TO_BE_REPLACED

This years bumper selection of players scoring 12 13 or 14+ over the season.

END_OF_DOCUMENT_TOKEN_TO_BE_REPLACED

Practice starts at 7.00  (there are no compensatory throws see rule 39)

Mon 10th Sept A Section Playoff Between Berinsfield A and Plum Pudding at Ab.Utd

moved from 26th due to Winter League clash